Birds Belong to the class Aves, and consist of approximately 10,000 species, grouped into 24 orders. The order Passeriformes (known as passerines or songbirds) contains more than half of the known bird species. The remaining orders are known collectively as non-passerines. Over 1200 bird species occur in the Indian region. Bangladesh has 620 species of birds of which 301 are resident and 319 are migratory. Sarus Crane (Grus antigone) is the largest (standing about 1.75 m) bird in the subcontinent, but it is now rare in Bangladesh. A few flowerpeckers and sunbirds, smaller than the sparrow, are perhaps the smallest. The bird population in Bangladesh is shrinking fast. Today about 41 species are threatened in Bangladesh, of which 19 are critically endangered, 18 endangered and 4 are vulnerable. The Pinheaded Duck (Rhodonessa caryophyllacea), the Nukta or Comb Duck (Sarkidiornis melanotos), the Common Peafowl (Pavo cristatus), and the Burmese Peafowl (P. muticus) which were more or less widely distributed until 70 or 80 years ago, have virtually disappeared from Bangladesh. 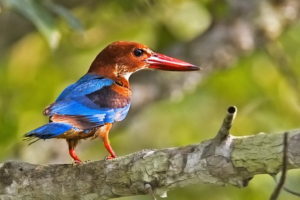 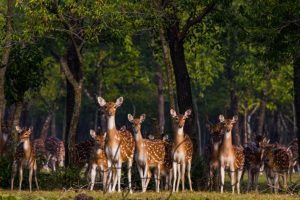 Mammals Members of the class Mammalia, including humans. Today there are some 4,500 species of mammals worldwide, of which roughly a tenth occur within the Indian subcontinent. In Bangladesh there are 121 species of mammals. They range in size from tiny shrews and pipistrelle bats, which weigh only a few grams, and measure a few centimetres, to elephants that stand over 3 metres at the shoulder and can weigh over 4 metric tons.