ESDO was the first organization in 1990 to conduct comprehensive research into the adverse effects of the production and use of polythene in Bangladesh. Environmental consequences stemming from commercial production to the effects on soil, water (chemical contamination and drainage), the atmosphere, plant and animals, agriculture, health, and the economy, have been successfully researched and documented and was employed as the basis for ESDO’s nation-wide anti-polythene campaign.

Under the guidance and direction of ESDO’s Secretary General, Hossain Shahriar, ESDO organized a nation-wide anti-polythene campaign in 1992, which involved the media and support by numerous organizations and public leaders. In 1999, the Ministry of Environment and Forest recognized the anti-polythene campaign as the most important national movement, while in 2000, the Ministry of Environment and Forest selected ESDO as the principle task force representative in pushing a complete ban of polythene bags. ESDO received world-wide recognition for the commitment and success of the campaign – Australia, India, Pakistan, United States of America, Japan, and European countries, have either recognized or followed ESDO’s initiative. Thanks to ESDO, not only has a global campaign emerged, ESDO has made a significant contribution to minimizing waste pollution in Bangladesh. 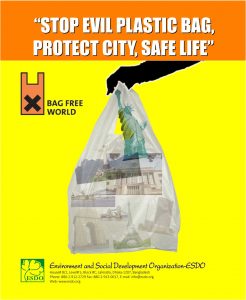 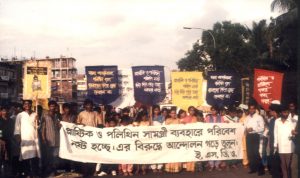 Polyethylene is a non-biodegradable, organic chemical compound found in common products such as polythene bags, plastic furniture, and kitchen materials.

But did you know

History of the Polythene Campaign Milestones 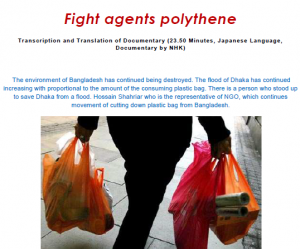