Microbeads: A Serious Health and Environmental Risk to Bangladesh 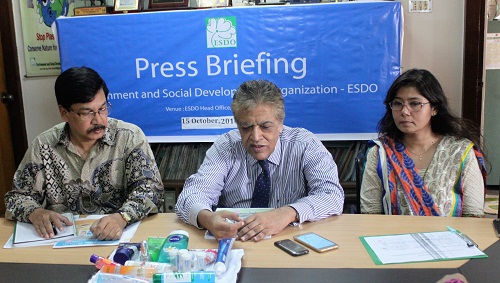 Dhaka 15, October, 2016: Many leading brands are using tiny plastic microbeads as exfoliating and cleansing ingredient in their personal care products such as face wash, scrub, and toothpaste. Around 7928.02 billion microbeads go to the rivers, canals and other water bodies in Dhaka, Chittagong and Sylhet cities in every month. A study report entitled “Microbeads! Unfold Health Risk and Environmental Pollutant” revealed the information about these health and environment threatening pollutants. Environment and Social Development Organization –ESDO published the study report in a press briefing yesterday in Dhaka. Syed Marghub Murshed, former Secretary of the People’s Republic of Bangladesh and Chairperson of ESDO disclosed the report.

Mirobeads are plastic particles less than 1mm in size that can be spherical or irregular in shape and produced in a multitude of colors. The types of plastic most commonly used as microbeads are: polyethylene (PE), polymethyl methacrylate (PMMA), nylon, polyethylene terephthalate (PET) and polypropylene (PP).Sewage treatment plants are not equipped to remove particles that are small. Fish can confuse them as eggs or zooplankton and accidentally ingest them, which ultimately end up in human bodies. Microbeads being small in size have a large surface area by volume. As a result, they accumulate toxic contaminants. Consumption of these toxic chemicals may cause liver toxicity and disrupt the endocrine system. Microbeads in beauty products and toothpaste can be harmful to skin and teeth accordingly.

In response to question from a journalist, Syed Murshed said, microbeads is a new phenomenon in Bangladesh but this compound is a serious health and environment polluting agent. He said that we need to address this issue with high priority to protect our ecosystem, wildlife and human health.

ESDO Secretary General and ecosystem expert Dr. Shahriar Hossain informed that the marine species are unable to distinguish between food and microplastics and therefore indiscriminately feed on microbeads. These sea foods are regularly consumed by humans. This is the way microbeads will start accumulating in the food chain, transferring from species to species, with consequences ultimately to humans. Dr. Shahriar said, toxic chemicals added to plastic during the manufacturing process (such as plasticizers and flame retardants) leach out of plastic in the small to large water bodies, wetlands and the marine environment and poses serious threats to marine fauna.

Amongst other, Siddika Sultana, Executive Director, ESDO, were there to share their opinion about the importance of the regulation to limit the content of microbeads in our daily personal care products. The ESDO team of experts said, the horrifying truth is that we don’t know how much of this plastic junk is despoiling our rivers, wetlands and the sea and no one know the toll it is taking of wildlife and people. Tiny plastic beads in everything from personal care and cleaning products to toothpaste are poisoning our river and sea to oceans and threatening health. It’s time for them to be outlawed.

ESDO team collected and analyzed 60 most popular and commonly used products from different areas of Dhaka, Chittagong and Sylhet. Six categories of samples were collected, i.e. Detergent, face Wash, body wash, nail polish, toothpaste, face and body scrub and microbeads were separated from those samples. A questionnaire survey was done on 1800 people to determine the level of awareness among manufacturers and consumers. Among all the products, facewash are found to be mostly used by the consumers. About 95% consumers do not have any idea about the harmful impact of microbeads on health and environment. When they were given the idea of the fate of microbeads, half of them decided to switch from microbeads to safer, natural alternatives. When ESDO study team reached the retailers, they found that about 92% of the retailers are ignorant about this plastic pollutant but 40% said that they will remain conscious about selling those products. To know the level of pollution in water body, about 100 fish samples of 5 species (i.e, Catfish, Rui, Catla, Mrigal, Illish, Sarputi) were collected from the different water bodies of Dhaka, Chittagong and Sylhet and study findings show that larger fishes such as Rui are found to be more contaminated than smaller fishes such as Sarputi. On the other hand, fishes of Dhaka city were found to contain high content of microbeads and the fishes of Sylhet were found to contain least amount of microbeads in their body.